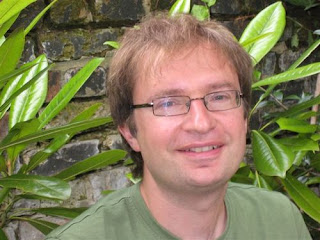 Euro #scriptchat is honoured to have comedy writer Kevin Cecil (@kevcecil) as our next guest on May 13th 2012.

Kevin Cecil is best known as well as one half of a writing team with Andy Riley. Together they created the sitcoms The Great Outdoors, Hyperdrive and Slacker Cats as well as co-writing 8 episodes of Black Books. Other TV work includes Little Britain, Come Fly With Me, The Armando Iannucci Shows and Armstrong & Miller.
Robbie The Reindeer Hooves of Fire, which Andy and Kevin co-wrote, won a BAFTA, as did Black Books.
Kevin and Andy co-wrote the animated film Gnome & Juliet and are currently writing the sequel. They also worked on the Aardman film which is either called Pirates In An Adventure With Scientists or Pirates Band Of Misfits depending on where you live.
Kevin script edited Watson & Oliver plus several upcoming pilots. Acting credits include Spaced, The IT Crowd and Arthur Christmas.
Kevin was born in London and lives, unimaginatively, in London.

Come join us as we chat to Kevin Cecil on Sunday May 13th at 8pm BST
Posted by Teenie Russell at 12:20 PM