We are very excited and honored to have had Guinevere Turner @turnerguinevere, screenwriter of American Psycho and The Notorious Bettie Page on as our guest. Be sure to not only read the fun below, but also check out her IndieGoGo video for her new project, Creeps.

Or read the chat on the Storify site.

Posted by Jeanne Veillette Bowerman at 6:25 PM No comments: 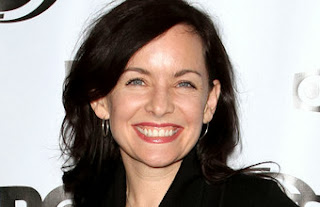 Guinevere Turner @turnerguinevere is a writer, director and actor who has been working in film and TV since her 1994 debut film Go Fish. She went on to act in several films, including The Watermelon Woman, Chasing Amy, and Treasure Island.  Eventually she teamed up with Mary Harron to write American Psycho and then The Notorious Bettie Page. She was a staff writer and story editor on Showtime’s The L Word, and she played a recurring character on that show. She has written and directed five short films, two of which showed at Sundance, some of which played on TV and around the world, and some of which were completely ignored.

Currently, Guinevere is in pre-production of her feature film, Creeps. Check out her Indiegogo campaign for her fun video of puppets on drugs... oh yeah, puppets are the best marketing tool ever.

Join the USA Scriptchat community to discuss writing, directing, indie filmmaking, and anything else we can cover in an hour!

Be there to meet Guinevere at 5pm PST using the #scriptchat hashtag.

Posted by Kim Garland at 6:17 AM No comments:

Scriptchat peeps chime in on what makes the first 10 pages shine. Some links to great articles too. Want a copy of The Hollywood Screenwriting Directory with contact info for over 2500 execs? Code "RETW11" takes 20% off until the end of the November 2013!  @jeannevb

Posted by Jeanne Veillette Bowerman at 7:14 PM No comments:

Tonight we talked about Crime Dramas both in features and in TV.

You can read the transcript directly on Storify or just below.

Posted by Teenie Russell at 1:31 PM No comments:

Tonight we talked about navigating Hollywood without an agent. As always, our scriptchat gang had a ton of tips for getting your script read, protecting your work, building your network and more. Enjoy! @jeannevb

The transcript can also be found on Storify.

Tonight on Euro Scriptchat we had the pleasure of being joined by writers Jane Espenson and Brad Bell. The duo shared their knowledge and tips on TV writing and creating the Online TV Series Husbands.

You can also read the transcript on Storify.

Posted by Teenie Russell at 1:49 PM No comments: 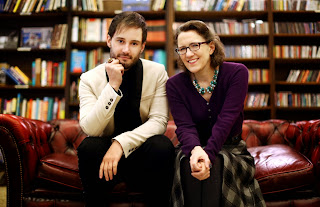 Euro Scriptchat is honoured to be joined by screenwriters Brad Bell and Jane Espenson on Sunday the 3rd of November at 12:00 PST (8pm GMT).

BRAD BELL is Executive Producer, co-writer, and star of Husbands, a marriage equality comedy that has become an online sensation and garnered positive notices from The Atlantic, USA Today, and The Advocate. The New Yorker hailed Bell as "the standout" in a rave review -- the only one that publication has ever given to a web series. Bell has been nominated for both writing and acting awards for his work on Husbands.

You can follow Brad Bell on Twitter at @GoCheeksGo
JANE ESPENSON is best known for her work in the area of science fiction television.  Her early work was primarily in comedy and included stints at Dinosaurs and Ellen.  She later moved to the hour-long format where she wrote for shows including Buffy the Vampire Slayer, Angel, Firefly, The O.C., Gilmore Girls, Dollhouse, Battlestar Galactica, Caprica, Game of Thrones and Torchwood: Miracle Day. She also co-wrote and executive-produced the Emmy-nominated Battlestar webisodes, and co-created Syfy's Warehouse 13.  She has written comic books, short stories and edited books of essays related to several of these shows.  She is currently proud to be a Consulting Producer of ABC's Once Upon A Time, Once Upon A Time: Wonderland, as well as continuing her work on the award-winning sitcom Husbands with her producing partner, Brad Bell, on the CW Seed.

Make sure to watch Husbands Season 1, Season 2, and Season 3!

Posted by Teenie Russell at 12:19 AM No comments: