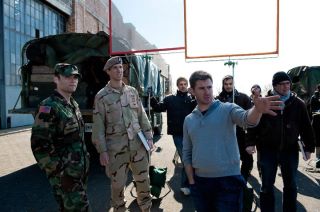 #Scriptchat TOPIC: Writing to a Budget

Michael Connors @AllegianceNews is an award-­‐winning writer/director/producer who has worked in feature films, commercials, television and the Internet.  He is one of the founding partners of Five by Eight Productions, which recently produced ‘Allegiance’ – Michael’s feature film debut as a writer/director.  ‘Allegiance’ is an independent narrative feature that stars Seth Gabel, Pablo Schreiber, Bow Wow and Aidan Quinn and is currently in post-­‐production.  Michael’s other recent projects include directing and producing several spots for ESPN’s Back History Month campaign and he recently sold the narrative web series, ‘Steele Vows’ to ABC/Disney.

Michael received his BA from Harvard University in 1997 concentrating in Political Science.  Upon graduation he was commissioned an infantry lieutenant in the United States Army through ROTC.  After and completing his four years as an Army Ranger and Captain in both the active service and the New York National Guard, he moved to New York City where he was accepted to the prestigious Columbia University’s Film Division in New York City.

While pursuing his MFA in Directing, Michael wrote and directed countless films, including the short film, ‘Recalled’, his award-­‐winning thesis project that premiered at the Tribeca Film Festival, and upon which the feature is based. It went on to win the IMAX Outstanding Achievement in Filmmaking Award, the Prestigious National Board of Review of Motion Pictures Award, The Platinum Award for Directing at the Worldfest in Houston and was a Finalist at the Angelus Student Film Festival in Los Angeles.

Michael currently resides in Los Angeles where he is an Adjunct Film Production Professor at the  Art Institute of California, Hollywood and The New York Film Academy (Universal Studios).

Posted by Jeanne Veillette Bowerman at 6:00 AM