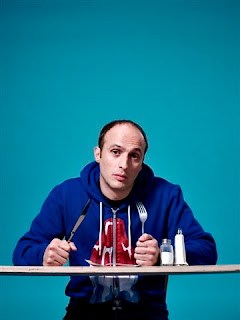 Ever wondered what it's like to write comedy for television?

Ever wondered what it's like to write a sitcom?

Ever wondered what it's like to have both of those projects get shot and aired on the tellybox?

EURO scriptchat is hosting none other than Robert Popper! For a bit more info on who this guy is, have a read for yourself:


Robert Popper is a multi-award winning writer, producer and performer, and best-selling author.


Robert produced Peep Show for Channel 4, winning a BAFTA for series 4 and British Comedy Awards for both series 3 and 4. With Peter Serafinowicz, Robert created, starred in and composed the music for the BBC 2 spoof science comedy, Look Around You, winning the Rose D’or for Best Comedy in 2006 plus a BAFTA nomination.

Robert has written on a number of shows, including BBC’s BAFTA winning Harry & Paul, and The Peter Serafinowicz Show. He has also script-edited some of the country’s most exciting comedy programmes, including Graham Linehan’s EMMY award-winning IT Crowd, Peep Show series 5, 6 & 7 and the multi award-winning The Inbetweeners.


As a Commissioning Editor for comedy at Channel 4, Robert commissioned Bo’ Selecta!, helped develop The IT Crowd, oversaw two series of Black Books, as well as series 2 of Spaced, and ran Comedy Labs.

In 2010, Robert wrote on series 14 of South Park in LA, and script-edited BBC3′s Him & Her. His six part comedy series, Friday Night Dinner – starring Tamsin Greig, Simon Bird, Paul Ritter, Tom Rosenthal and Mark Heap – which Robert wrote and produced – aired on Channel 4 from February 2011, and BBC America from July 2011.

He is currently exec-producing a new sketch show – Watson & Oliver – starring Lorna Watson and Ingrid Oliver for BBC2, and writing series 2 of Friday Night Dinner, which airs on Channel 4 in 2012.


It's a lengthy bio and we're looking forward to the chat! Join us on September 18th - should be excellent! Check out his website here.
Posted by Alli Parker at 10:09 PM